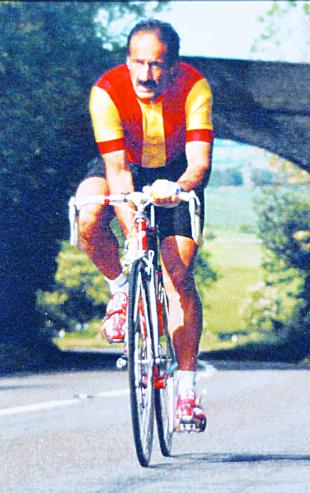 If a list was compiled naming couples that have made the greatest contribution to the sport of cycle racing, Ray and Helen Minovi would be up towards the top.

Ray started racing for the Worcester St John’s in the 50’s with his first race in 1955. In 1963 he had his first major win riding the Tour of the Cotswolds and by 1964 his first race representing Great Britain in the Tour of Holland, followed by the Milk Race later that year. Since this impressive start he went on to have great success in later life too with Four National Championships, Vets National Champion five times

And Eighty-Five wins in LVRC Road races against many of the best vets in the country.

Ray had ridden with and raced against some of the greats. He shared the road with Eddie Merckx in the 1963 Manx International and shared Herne Hill track with Tom Simpson and Jacques Anquetil in 1964. Most people would have been happy to achieve just one of those!

On a Racing bike Ray was fast, focussed and extremely competitive but he wasn’t just a one trick pony either, he could climb, sprint and time trial with the best achieving:

We could fill pages with his successes and he will be remembered for his often unbeatable ability, but Ray also managed to put back in as much as he had taken from the sport and that is something special!

Ray was an English teacher by trade and his skill lead him to be in much demand as an Editor and contributor for many cycling publications over the years, his biggest contributions being for the ABCC and the LVRC publications. He read a tremendous amount of articles and reports which gave him a wide breadth of knowledge in cycle racing and coaching. He also enjoyed correcting the many errata and the hopelessly misinformed in cycling weekly and the broadsheets with his dry wit which drew many laugh out loud moments when reading. His talents will be hard to replace.

Ray was one of the longest serving members of the Warwickshire Road Club and he made a large contribution. He was our club coach and more recently President.

He was a steady hand in the last few years whilst the club had lost many of their committee members including Bill Glaze, our longest serving secretary and a tremendous asset to the club over many years, Dave Butt and recently Geoff Gurney passed away. Many of the new committee members looked to Ray for guidance and he helped move us forward again which we will forever be grateful for.

He fought his illness with bravery and without complaint, the cycling world has lost a great man.